How did they live? | JORVIK Viking Centre

How did they live?

The Vikings > How did they live? 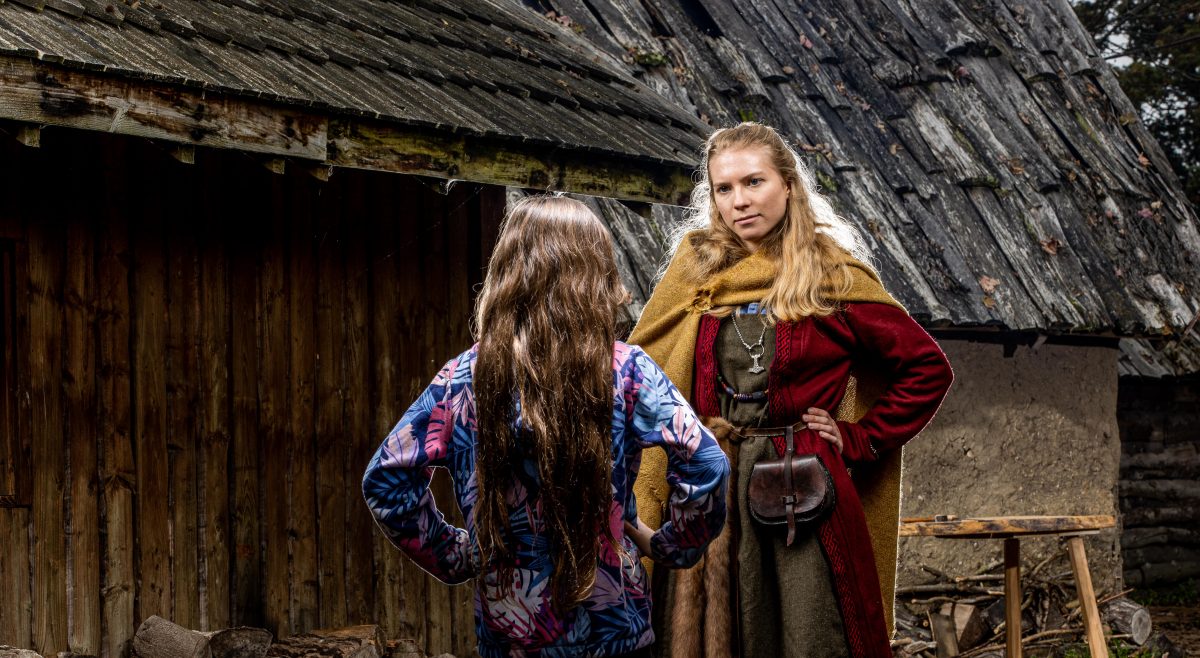 The Houses of JORVIK

Much of the detail about Jorvik comes from the excavation of four Viking-age house plots in the street of Coppergate. Up to the mid 10th century the buildings in this area of Viking-age York were single-storey structures, typically at least 7m (23ft) long by about 4.5m (14ft 9in) wide. Their size and construction is reminiscent of Anglo-Saxon buildings and is not typically Scandinavian. Upright posts set into the ground at fairly short intervals along the wall lines supported a thatched roof. The walls themselves were made of wattle withies woven horizontally in and out of stakes set between these posts. Benches of earth contained within a revetment of wattlework sometimes ran along the side walls. Each building had a very large central hearth, with edges defined using re-used Roman tile, or building stones, or lengths of wood. The floors were simply made of earth, onto which debris accumulated and into which objects were trampled.

In the 960s and 970s these post and wattle buildings fell out of favour and were replaced by cellared structures in which a semi-basement was used perhaps for storage. This type of structure is well known from other 10th-and 11th-century towns in England, and seems to have been the favoured urban building form. These buildings used planks of oak and stood in two ranks along the street at Coppergate. The use of a cellar increased the usable space in these buildings, and the fact that the buildings were constructed in two ranks demonstrates that space was at a premium in the boom town that was Jorvik at this time.

All the industries, for which we have evidence at Jorvik, were carried out in and around the houses-cum-workshops that stood at the street frontage of each of the plots at Coppergate. Under the Vikings, Jorvik developed as an important manufacturing centre, which supplied a wide hinterland with a range of everyday items.
Raw materials flowed into Jorvik from estates in the surrounding countryside, and specialist craftsmen fabricated them into necessities for sale in their street front shops and market places. For example, the name Coppergate comes from Old Norse words signifying ‘the street of the cup-makers’, and the excavation duly exposed hundreds of wooden cores, the characteristic debris from turning wooden cups and bowls on a rotary pole-lathe.
Such vessels were the normal table wares of the period, and it is clear that the cup-makers of Coppergate were mass-producing these items on a commercial scale. Evidence found around Buildings B1 and C2 point to these being workshops for wood workers. However, this was not the only trade being practised on the four plots in Coppergate in the 10th century.

Metal workers were producing iron objects such as knives, dress accessories, tools and a host of other items, as well as working in gold and silver, and making cheap jewellery in lead or copper alloy. The excavations produced evidence of the entire process of metal working from ores, metal-separating trays, crucibles and moulds, through to the finished articles. These items, in addition to the waste products in the form of dribbles, off-cuts and failed castings, indicate the presence of a blacksmith’s workshop on the site, and a non-ferrous metal (metals without iron) working workshop as well.
These workshops brought together materials from far and wide: gold and silver from Europe or Ireland, copper and lead from the Pennine range, and tin from Cornwall. Crucibles were imported from Lincolnshire, and some of the ingot moulds are made from stone from Shetland or Scandinavia.

At the Coppergate dig, two Viking-age coin dies were found.

Using a hammer, the dies were used to imprint a design on a metal coin.

One of the designs, which we think was made in Jorvik in the 920s, reads SKIPE TRIO. This is an abbreviated Latin form of the name Saint Peter, who was the patron saint of York Minster. It also shows a sword and hammer, thought to be the hammer of Thor, Norse God of Thunder. The design suggests the blending of religious beliefs in York at this time. The other coin die is Anglo-Saxon and was also made here in Jorvik. It says EDELSTAN REX TO BRI – Aethelstan, King of the whole of Britain. Aethelstan recaptured York from Viking rule in 927.

Both the original coin dies can be seen in the JORVIK artefact gallery.

Buy a JORVIK coin when you book your JORVIK tickets and we’ll have it ready for you when you arrive.

Other Evidence of Viking Craftsmen

Shoemakers and shoe repairers plied their trade at Coppergate, and there is evidence that leather boots and shoes were made and repaired together with belts, straps, pouches, thongs and elaborately decorated sheaths and scabbards. Piles of leather off-cuts of cattle and occasionally sheep hides indicate where the leather workers carried out their crafting activities. Tools found at Coppergate include iron punches, awls and creasers, as well as a range of needles and balls of beeswax, which was used to lubricate the needles as they passed through the leather. Specialist carvers of bone and antler made combs and other items such as pins to fasten clothing, and strap-ends to attach to leather belts, as well as needles, and spindle whorls used in textile making. Small pieces of bone and antler were shaped into finger rings, gaming pieces or amulets, whilst larger pieces were made into skates, handles for knives and other tools. One curious object found at Coppergate is thought to be a bow from a small saw. Small bones with holes drilled through them are simple noise-makers; when threaded onto a twisted cord and pulled from both ends, they hum or buzz. Combs were among the most commonly found objects at Coppergate. These were used for grooming and also to get rid of troublesome head lice. All stages of comb production were found from sawn off-cuts of antler to the finished product. Each comb is made up of a number of plates which are riveted together and then the teeth are sawn. Many of the combs were decorated.

Much of the evidence discovered at Coppergate was preserved thanks to the protective, oxygen-free cocoon provided by the organic-rich soil. The organic component was largely a mix of plant debris, including remains of twigs, plants, wood chips and thatch used in building, and also straw and heather used for bedding. The debris also contained material from some of the manufacturing activities such as wood working, antler working and textile working that took place on the site, plus all the human rubbish and organic waste generated in everyday life. Thanks to this rich deposit of environmental evidence we have been able to build up a much clearer picture of what life was like in Viking-Age York.

Evidence from the early period of Viking occupation at Coppergate, in and around the first post and wattle structures, included straw or threshing debris of cornfield weeds and cereal chaff, plus twigs, leaves (holly and oak), bud-scales (oak), catkin, wood sorrel seeds, and woodland moss. A snail from this same area indicates the importation of woodland litter used for floor covering, as the species is found most often in these habitats. Heather, cross leaved heath and bracken were also found, possibly used as bedding, plus a few peatland / heathland insects, some of which may have arrived in peat, although there are no remains of peat in these early occupation layers.Traces of dye-plants were also present from the early occupation through to the later period, such as dyers greenweed and pod remains of woad, and there is also evidence for the disposal of dye-bath waste. Ash, which may have originated from the hearth in the buildings, may also have been used in dying as a source of alkali.

Evidence of beeswax exists, and in some cases honeybees, from both the early and later periods of occupation. Textile working, or at least wool cleaning, is suggested by the substantial number of sheep lice and keds in the early layers, and there is some evidence that flax was processed at this time. Insect assemblages include human fleas and human lice, which were deposited on the floors of the buildings. Other floor deposits from the early period include quite large insect assemblages, which points to fairly foul living conditions, including large quantities of mouldering plant remains. Large numbers of puparia of house flies were also found, as were woodworm beetles. The floors of these buildings were probably by no means dry by modern standards, but they were generally not too unpleasant for sitting on. Whilst there were often large populations of insects in the floors, it was quite likely that most went about their lives unnoticed. In later periods, when the planked buildings were in use, the houses seem to have been cleaner and drier, with insects that would more usually have been living inside houses, although ‘outdoor’ insects were also present in similar quantities in house floors and external deposits, which may suggest that these houses were rather open.

Pits from the earlier period showed evidence of human faeces containing large amounts of parasitic worm eggs. This evidence also showed a wide range of food-plants, wheat and barley.
Possible evidence for materials used for sanitary purposes included fragments of woollen yarn and also large branching mosses.One pit also yielded some charred bread, dog coprolite (faeces), feathers, daub, a fragment of bracket fungus, the vertebrae of an eel and herring, plus approximately 200 sloe fruit stones. These pits obviously contained a wide range of domestic and other waste, and based on the small amount of insect evidence in the pits, this waste probably accumulated very quickly. Evidence pointing to food plants includes rowan, bilberry, rose and various species of rubus, plus cultivated plants such as walnut and field bean, which included a bean weevil. One spot find included approximately 100 cherry stones, and flavourings such as dill, celery seed and summer savory were all recorded. Two sources of edible oil were found: hemp and linseed.

Waste, like our fossilised poo, can tell us about Viking food habits, and what parasites infested them