Flora and Fauna of Viking-Age York

The Vikings > Flora and Fauna of Viking-Age York

Viking-Age York was a thriving city and this was reflected in the flora and fauna which was found during the Coppergate Dig in the 1970s and 80s. Found amongst the artefacts displayed today at JORVIK Viking Centre was plenty of biological evidence, giving us an insight into the animals which lived in the city, the plants that grew and the marine life which was also found here.

Amongst the organic matter which was found at the Coppergate Dig, there was a fridge full of ingredients which we still use today.

A hedgerow full of berries...

an image evocative of an English summer; archaeological evidence shows that Viking-Age York had blackberries, dewberries and woodland strawberries growing in the city.

Some common salad ingredients of today could also be found in the city of Jorvik such as celery, coriander, lamb’s lettuce and wild radishes, as well as wild parsnips.

With the river providing a food source as well as great trading opportunities, it comes as no surprise that shellfish was found in the city including cockles, periwinkles, whelk and oyster. However, the evidence actually points to the possibility that these were from the Humber Estuary rather than York Juvenile muscles and bones were found in the fish, indicating that these catches were brought back to York for processing rather than being processed at the source.

While travelling through the Viking-Age city on our ride experience at JORVIK, you can spot dogs, cats and pigs inhabiting the city but what about the other animals which we know were found here.

There is evidence for rodent activity in the city. Black rats, wood mice and house mice have been found as part of the Coppergate Dig. However, red squirrels were also found here – albeit probably not in people’s houses!

Of course, as in the modern day, the rivers provided some amphibious fauna to the city aside from the fish that were being caught, sold and eaten on a daily basis. Bones of common frogs were found here as well as evidence for water voles also being residents of the city.

There were also pole cats found here, an animal native to Western Europe, which may have been brought into the city as a way of controlling a vermin problem… possibly something to do with those rats we found! 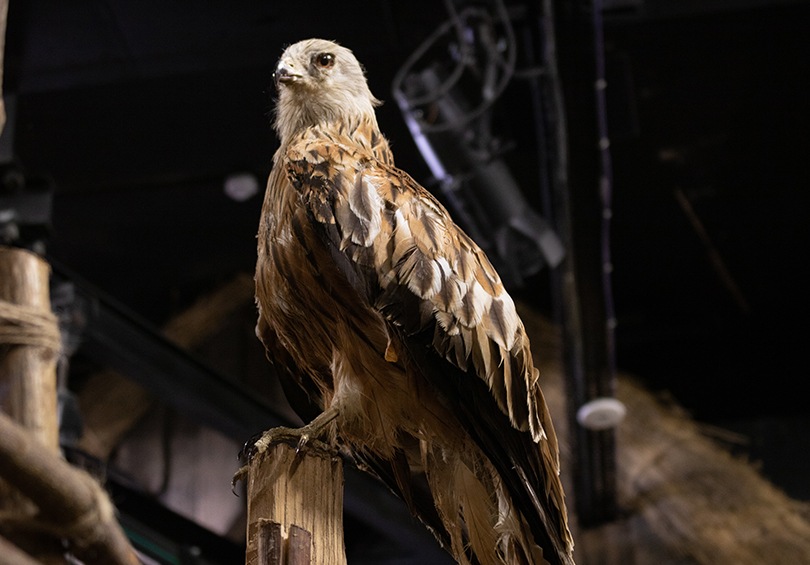 The skies of Jorvik were also very well inhabited.

A wide range of feathered friends have been found as part of the city’s archaeological evidence from domesticated and common birds to birds of prey.

Fowl was kept in the city as a domesticated animal, whilst ducks, mallards and geese were also found here – maybe the ancestors of the geese who still wander the city today! Evidence for both mute swans and whooper swans were also found.

If you’d looked up into the trees or roofs of houses, you probably could have found any number of cranes, doves and wood pigeons. If you had watched closely and for long enough, you could have caught sight of ravens, red kites, buzzards, sparrow hawks and short eared owls!

We know that the man on the toilet is one of everyone’s favourite features of a trip to JORVIK but did you know that two different types of moss had been found in the city? Moss would have been used as toilet paper in the Viking Age and native to Coppergate were both neckera and tree fern. Spot our animals when you visit JORVIK